Discussion forum for the Otter class of sailing dinghy

Hi folks.I hope someone can help me out.

I bought an otter dinghy last year (sail no. 640, bermudan rig) which I am currently modifying for use as a cruising boat. I have fitted a folding bunk for overnight sleeping, made a tent awning over the boom and converted some of the boyancy into storage lockers. However the previous owner, a lovely guy, had made a lot of alterations to the rig in order to race the boat, so a lot of the original layout (especially the setup of the running rig for the mainsail) has been changed and is hard to reestablish without more information.

I have been told that in the past a gent called Roger Brain from this forum had a copy of the original rigging guide which he distributed to those who wanted it. I have tried to get hold of Roger but have not been able to find a valid email address for him anywhere. The most recent I can find is with tesco.net from 2009 but that is no longer valid.

Does anyone here either know of an address for Roger or better still have a copy of the rigging guide that Roger was passing around back then?

The manufacturer's information, particularly the rigging guide would help me tremendously in restoring the setup back to its original state so I hope you will be able to help me.

The brochure can be found on this guys website:- folk.ntnu.no/wells/Otter/index.html It probably won't help to much with the rigging though. What part of it is giving you problems - its not the most high tech rig in the world so if someone has changed it all for racing they have probably improved it!
Regards James.
Top

Thanks for your reply. What I essentially have is several potential places for the kicker to attach at the bottom. One atfoot the mast foot and one below that on the bulkhead in front of the foredeck. Either will work but one was set by a pro as part of the design and one by a guy who wanted to do it his way. I'd like to go with the designer's way but I don't know which that is.
There is also a ratchet block (one of those spring supported ones) bolted behind the thwart which implies that some thing was attached between bthat and half way along the boom. I'm wondering if it may be for the main sheet to be controlled from the boom's centre. Is that the original spec or should the main sheet attach at the end of the boom like most boats?
If the latter is the case what else might that block have been for? It may have been some factory option that I just can't work out. Then there are 2 clam cleats fitted UNDER the thwart, one on each outer end. Centreboard positioning?? Goodness know.
How are the centreboard controls supposed to be arranged in the 'correct' setup? I have a length of bungee running from the centreboard handle under the lip of the casing and through a hole at the back of the casing into jammer cleat. Then the are 3 possible places where a line to hold the centreboard raised might attach to. It obviously need to pull the centreboard handle forwards to raise it but where does it attach to ahead of the centreboard handle, to the mast? To the bulkhead? or to the base of the housing itself though that looks like a less favourable angle.

Anyway, you get the idea. I could just make it up as I go along and do my own thing like the previous owner but a I'd like to see how it all looks as per factory spec and develop it from there and b it would be easy for me to miss out on something that someone who's been building boats for a living may well have a much better way of doing that I won't be aware of.

Quite honestly if I go back to basics and have just a kicker, a stern mounted mainsheet, a rope to raise the board, and a rope to lower the board, that would be 4 sets of lines. On this boat that would leave me with literally double figures of pulleys and cleats now unused. I'd just like to be sure I wouldn't be discounting something the designer thought I would benefit from using.
Top

Hi Springer,
This is mostly guesswork based on my otter (don't know how original it is) and other similar vintage boats I have sailed. The mainsheet would have originally been aft sheeted, so your man has added the ratchet block in the centre to convert it to centre sheeting. While better for racing this may have some drawbacks for cruising. Proctor masts for small dinghies of that time generally had the kicker attached low down on the mast. I would assume that under the thwart is a good place to put the cleats for the centreboard so I suspect that may be original.

As to the rest of it, cleats and blocks forward of the thwart are probably for the outhaul and cunningham + there could be fittings for the spinnaker. At the end of the day I suspect that it would have been supplied with just very basic fittings in the 60s or 70s. i.e no outhaul (you could just tie at the end of the boom), and probably no cunningham blocks or cleats. It would have been up to the owners if they wanted to buy and fit more stuff.

All the best with it James.
Top

Ok thanks James. I guess that's the best way of looking at it.i think I'll stop off everything except the 4 lines mentione and then take it from there. It would have just been nice to have seen for sure what the factory intense if I could only get hold of the elusive Mr Brain and his rigging guide but no one has come forward so far so I guess I'll have to accept defeat on that one.

Just one final thing to compare with you. Is been so long since I've sailed dinghies. It's mostly keel boosts these days. So for the centre board I'm assuming it should be stretchable bungee cord holding it in the lowered position so that it can give upwards of it bumps anything and a rope holding it raised. Is that right?
And on yours do you find that the rope for raising it needs to go through any blocks for extra purchase or is it easy enough to pull up with just a direct line? 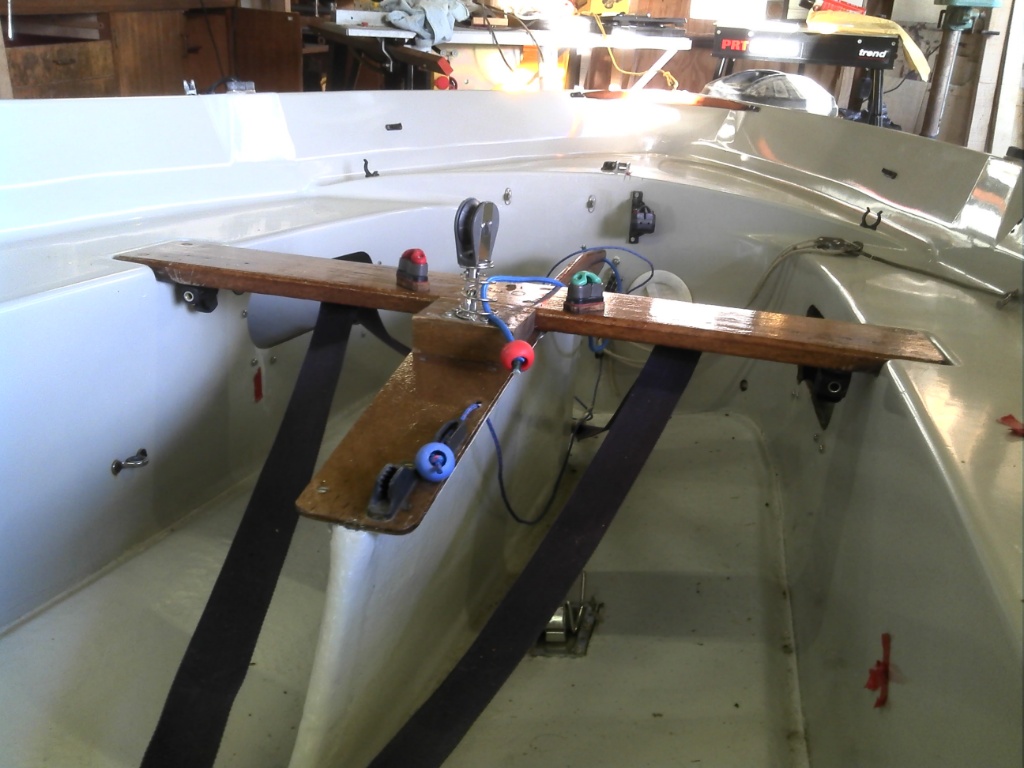 I've attached a photo of his current setup. The rope with the red ball is attached to a bungee which raises the board and the one with the blue ball is an actual non stretch rope which presumably should attach to one of the 3 places mentioned for pulling the board up either with a block and pulley system or just as a single line.
You can also see the mysterious cleats positioned under the thwart.

It'll be a while before a get it on the water late this year to try it out but knowing how the board raises and lowers now will be a big help rather than finding inadequate setup when I'm already in the water. The rest I'll manage with.
Thanks again.

Hi Neal,
Yes rope to hold the board up and bungee to keep it down sounds like a good format. To be honest I only cruise about in my otter (usually on my own) and my preference is to keep everything as simple as possible. My otter now has an aluminium board so holding it down is no longer a problem (although I do attach a line to stop it coming all the way up in the event of a capsize). To raise it I run a line through a small block attached at the forward toe strap fixing and have a jammer on the thwart (which is also handy for the mainsheet if you want to heave to).

Before I changed to an aluminium board I made my wooden board stiff enough in the slot that it didn't need to be held either up or down, you just had to grab it and give it a good push or pull. You can do this by screwing bits of hose pipe or similar to the board near the top.

Ok thanks James that's useful info, especially about where the centreboard's raising block is attached on yours.

Just as an aside, hire do find the boat handles note with a metal board? Is it much heavier to raise and does it make the boat any more stable to move around in (i.e. With more weight below the water? I ask because I'm not the lightest of folks and a bit more stability when I'm moving around when not under sail may be a good thing for me, especially when at Anchor which I hope to be a lot of the time whilst overnight cruising.

It is thinner than the original board and from memory weighs about 15lb. So it doesn't really add a great deal to stability (although obviously it does help a little bit). Likewise it doesn't really make much difference to the speed of the boat. I have found that downwind it doesn't make a lot of difference to speed if it is raised or lowered so being lazy I tend to leave it down. The main benefit is that it is indestructable, it doesn't get damaged when it hits the bottom and it doesn't snap and let you down if you need to right the boat. I found it a bit of a mission righting the boat when the last one snapped, and sailing back tired, soaking wet, upwind with the paddle strapped to the shroud as a leaboard is not something I want to be doing again in a hurry.
Regards James.
Top

Yes I can see the benefits from that perspective and like I said I'm not the lightest person in the world by any stretch. There are few dinghies that my weight on the centreboard wouldn't right fairly easily but that's no good if I were to snap it along the way.

I may look into that idea when I finally get it on the water. Thanks for all the info James, much appreciated.